THE HEALTH CAPTAINS – Leadership for the patients benefit

The focus for SÜNJHAID! The Health Captains lies on cultivating and activating one Sustainable leadership in the healthcare industry oriented towards patient benefit – SÜNJHAID! propagates the

At the center of the leadership compass is “wellbeing” as the core task of self-leadership, surrounded by the areas of leadership responsibility that cannot be delegated away by a “Health Captain”:

Think-Tank and Network for the Future of value-based and sustainable healthy Leadership: 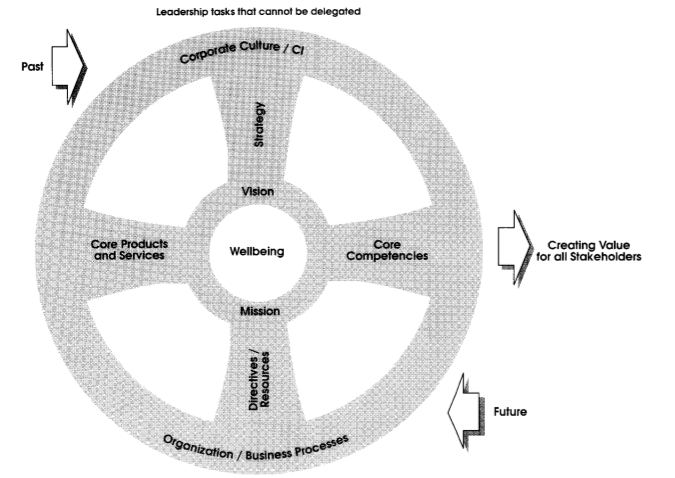 Leadership Compass ”according to Hinterhuber et al. (1998); Representation of management responsibility fields that cannot be delegated. The leadership factor “Wellbeing” as the anchor point of the “Compass Needle” essentially includes self-leadership and an authentic and balanced leader as a prerequisite for “Healthy Leadership”.

SÜNJHAID! strives for healthy leadership in healthy organizations. The inner well-being of the health captain is the inner dimension and, according to Hinterhuber et. al. (The leadership wheel: the tasks entrepreneurs and senior executives cannot delegate; Strategic Change 7, 149-162 – 1998) six dimensions:

The goal of SÜNJHAID! The Health Captains is the establishment of an international multi-professional & multi-stakeholder  Leadership Academy for Health Sciences and the Health Industry on the North Frisian seafaring island of Föhr, based on the model of the historic Föhr captain schools, which took place between the 16th and 18th centuries. Century over 2,000 captains and the organizational principle of the Baden-Baden Entrepreneur Talks – www.bbug.de –

Sustainable Networking is Synapting: The ability to network is an essential part of the leadership skills of “Health Captains”. Too many executives mistakenly see networking as a freestyle. The quality and ability of networking and synapting (linking separate network islands and scale from smaller networks to larger network units) is a leadership competence (“Leadership Compass“, SÜNJHAID! The Health Captains ), i.e. a core competency that cannot be delegated away by a manager and leader, but is directly connected to his own personality and defines his visibility.

A striking example of the appreciation of the quality of results of successful networking by a leader is the Chemistry Nobel Laureate (1954) and Nobel Peace Prize Winner (1962) Linus Pauling, who did not attribute his creative success to his luck or his immense intellect, but to his diverse contacts: “The best method of having a good idea is to have a lot of ideas”.

The ability to multi-professional and multi-sectoral “silo-free” networks and the professional management of interdisciplinary networks is increasingly becoming a central component of the leadership in the health industry and the health sciences, because medical-operational or medical-scientific stand-alone solutions are no longer competitive. The net message is: “The Only-I-Myself and Me-Company” has had its days.

Today’s reality is, in order to be successful in the long term, the own strategic network that has been built up and maintained over many years (Table 1) has become an alternative without alternative. Building a personal leadership network is not primarily a question of talent, but above all a question of your own will to do it.

SÜNJHAID! Networking for the Future of Health Sciences

wants to create such a valuable and transferable starting point for alle key-stakeholders to create the transdisciplinary international HEALTH 4.0 ecosystem and for future generations of leaders in the spirit of mentorship from its health captains. Becoming a Member of the Club: “Relationships are all there is. Everything in the universe only exists because it is in relationship to everything else. Nothing exists in isolation. We have to stop pretending we are individuals that can go it alone” – Margaret Wheatley

Neuroleadership: Dunbar`s Key Numbers in Networks are connected to the Tipping Point

Investigations by Robin Dunbar, head of the Institute of Anthropology at Oxford University, on our social network behavior and our limited number of capacity to maintain networks, resulted in metrics that clearly show our neurophysiological neocortex capacities for relationships ( SQ: Social Intelligence Hypothesis – Understanding and Managing Relationships). The number of people with whom we are at best able to maintain lasting and valuable contacts is approx. 150 people, i.e. this is a cognitively limited number of people with whom an individual can fully maintain social relationships. Within this relationship size, the talented networker not only knows all names and life stories – above all, he also knows all cross-connections and dependencies within this network of relationships. Dunbar has also found that the other group sizes we can control roughly correspond to a “rule of three”: a closer circle of friends can be made up of up to 50 personalities, while an “inner circle” supporting our activities can make up around 15 people. Dunbar measures the most intimate and trustworthy group of friends with only 5 friends or family members. With the help of the social key figures for networks of individuals created by Robin Dunbar, we can carry out a self-assessment of our personal cognitive network capacity, which makes each of us authentic and qualitatively more controllable to build and maintain our own network. Based on the cognitive ability for lifelong learning known from neuroleadership, we can expand our individual Dunbar parameters through active networking over time. This is a classic neurophysiological adaptation process. The Dunbar metrics help us analyze our own network to manage it quantitatively and qualitatively.

often consist only of clusters (network islands) that have no connection (synapses) to each other. Such unconnected clusters can be traced back to two deficient principles: 1. Principle of self-similarity: The “principle of self-similarity” says: When you make contacts, you tend primarily to surround yourself with the people who give you experience, training and worldview are similar. 2. The principle of proximity stands in the same way for the variety of networks: It means that you primarily include people in your networks with whom you already spend most of your time. Employees with similar training work in the same departments, and people from similar backgrounds tend to live in the same area. If you give in to your natural inclinations and build your networks according to the principle of neighborhood and self-similarity, then you only generate echoes and miss the actual purpose of networks: multiprofessional and multicultural diversity and broadening horizons through your own multistakeholder contact world.

and its added value is only created by interconnecting initially separate network clusters using a connector, i.e. a mediator who is personally anchored in these clusters and has the ability to switch between these clusters. Unconnected clusters without active mediators (synaptists) do not generate new information for the members of the individual clusters, but only echoes. Synaptics act as an active link between previously unrelated groups. A talented synaptist gives every member of each group access to other parts of the network and only by connecting the synapses of the separate network clusters can visible added value be created to solve complex tasks. Synapting is the real purpose of any network work. Neurophysiologically, our brain itself makes exactly the same synchronized synaptic interconnection of different anatomically separated brain areas for processing complex sensory impressions or in the genesis of our own complex creative world of thoughts. It is therefore not sufficient to operate networks formally, but an effective synaptic network is only created by the synaptic interconnection of the separate clusters. Mediators who even have the ability to interconnect several networks to form strategic alliances (Tab. 1) are called supra-synpatic-leaders.

In order to create a network that is rich in social capital, you should maintain active relationships with influential synaptists and these for your benefit and the benefit of others Support network members personally in their network work. If you are a synaptic yourself, then you can team up with other synaptists and perhaps form a network alliance together (Table 1). Networks provide access to confidential and private information – only the trust in each other in the network of relationships determines the outcome quality. With a one-sided, short-term participant role you will never become a valuable and respected member of a network and therefore cannot build lasting trust – only if you yourself unselfishly and regularly input into your own network will you get something worthwhile back yourself. Good networking is determined by your own attitude and your network loyalty and can only be done by yourself, e.g. especially by making unselfish new contacts for your own contacts. This increases your trust capital in the network and then you can access your network later with another authentication if you need it yourself. The added value of networks is created by your own investment in the network and takes time. In the long term, those who do not cooperate only in times of emergency win. A strategically sound network setup is time consuming. Net message: “Just do it”.

Already a small, particularly valuable multiprofessional and multistakeholder network of approx. 150 people (Dunbar Number), who are rich in their own synaptics and charismatics, can already trigger a tipping point themselves through the power of these multipliers and their external connections and effects in other comparable and different networks. According to Malcom Gladwell, the Tipping Point goes back to the law of the few and is the moment when an idea, a trend, a fashion or a social behavior crosses a threshold, tilts and spreads like an unstoppable wave. The tipping point is the moment of critical mass that is capable of triggering such a wave and Gladwell was able to show that this already corresponds to approx. 150 people in a network who can create the conditions for this.

Medicinale.Club
"Health is a responsibilty of the entire Society"

Leadership begins with you